I found this feature the other day and it's made my life easier. When compiling GMod the source is in a folder called src, and the generated binaries go in a folder next to src called game. To test it out I had a script that copied the binaries from game to sourcemods. That way I can run the development version of Garry's Mod as a Mod on Steam.

Well with mklink I can create a link between game and sourcemods. So that when I open the sourcemods folder it's identical to the game folder. It's the same folder under a different name. The OS treats it exactly as if the files were in sourcemods.

For example I have a .bat file in my source 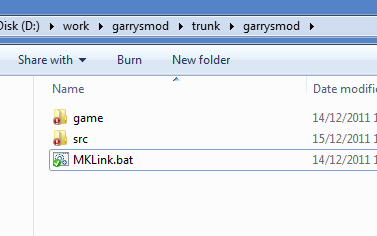 Thought this was a cool feature that someone might want to know about.