Sarah had taken two bags of blood over night. When I got to the hospital she was looking much, MUCH better. I took a photo to compare the difference to the previous night, using my own skin colour as the control. 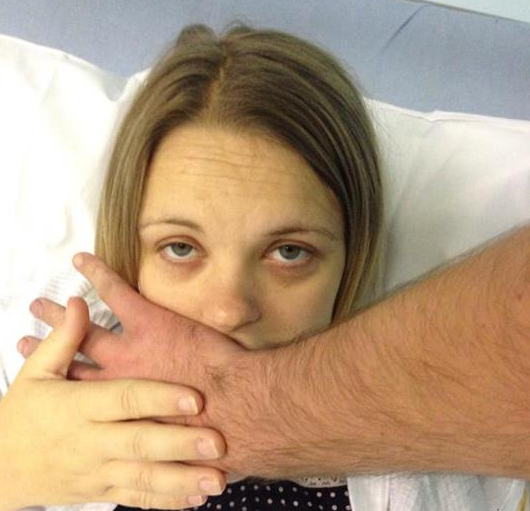 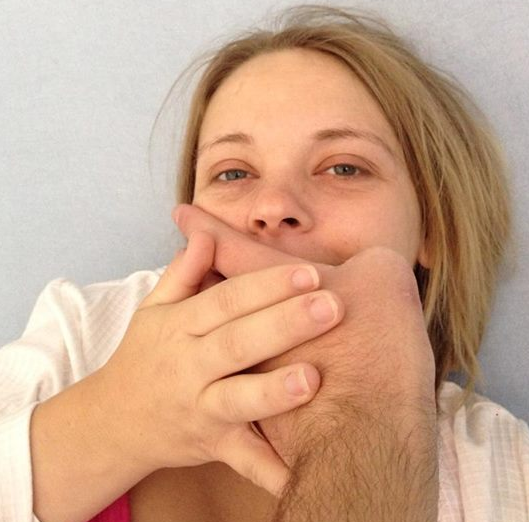 Alex was still in neonatal. Sarah was feeling stronger so we headed down to see him. The nurse told us that they had spoken to Birmingham Children's Hospital and they were ready to take him some time today. We were happy that something was finally happening and hung around the ward until it was time. Even though Sarah was feeling better her guts were still acting strange. There were multiple visits to the toilet with no success. Until the flood gate opened. She went to the toilet and filled it with what looked like chocolate rice crispie cakes. Unflushable chocolate rice crispie cakes. They floated on the top of the water. In the end we had to stuff a bunch of toilet paper down with them to get them to shift.

She was in a bad way. Could walk but only small steps, and very slowly. Sitting down or getting up was slow and agonising. But the light headedness was gone and she could stay on her feet for longer. We went for a walk to the lobby and bought some hair bands.

We were eventually alerted that it was time for Alex to go and we could go and say goodbye and talk to the doctors that were taking him. When we got there they were loading him to an even scarier looking travel incubator. 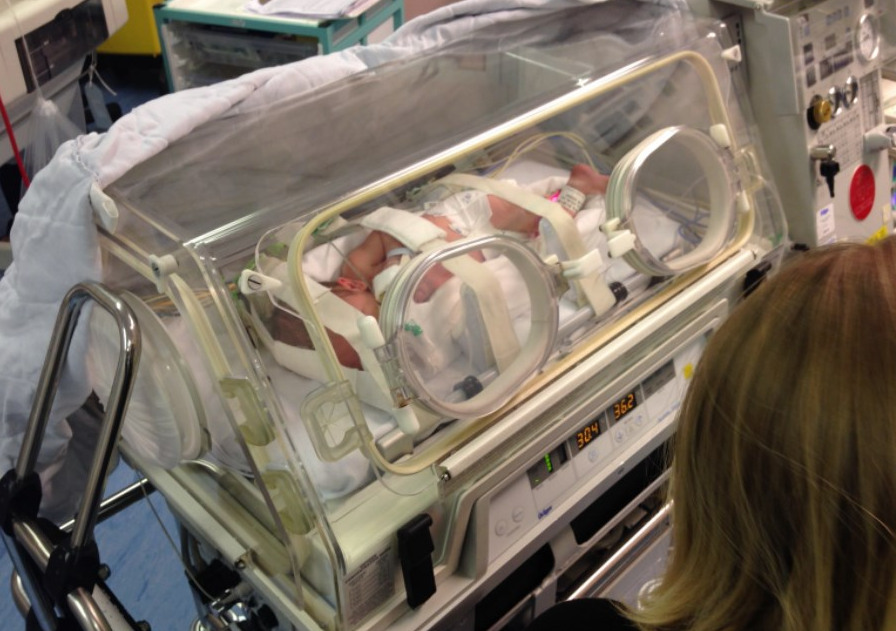 We watched him helplessly for a few minutes, chatted to the doctors - who all sounded really up-beat about it. He looked safe and he was in the right hands. Eventually we were told it was time for him to go and he was wheeled out of the neonatal unit. We followed - mostly on accident because it was the way out. They were moving faster than us and we entered a big corridor to see them in the distance wheeling him out of an emergency exit. Sarah sobbed as we waited for the elevator - which triggered me off. When we were exiting the elevator a few people were waiting on the other side of the door. They looked at us concerned and awkward. They must have thought something terrible had happened to us.. when in reality our baby was just being moved from one hospital to another.

We didn't feel like being around people so we sat in the corridor holding hands. I told Sarah about some of the Google'ing I'd done the night before. The nurses and doctors will never tell you the real bad stuff. Like what's the real worst case scenario. I like to know these things, I like to be prepared for everything. So I'd done some research. I'd found an Australian nurses manual explaining the procedure on what to do if a baby is vomiting green bile. The first point it made was to assume there's a bowel obstruction until you can prove that there's not one. It said to fit a pipe through the babies nose into his stomach to drain off the bile. To set the baby nil by mouth. To give him anti-biotics. To send the baby to a specialist centre that can look into it more. This was everything that had happened.

This all rang true with me. Alex was fine until they took him off us. He had done a poo when he was born. He was happy, he was awake, he was responding to light and sound. He wasn't in pain. The only symptom was the green bile - which had triggered this whole escapade off. They weren't going to tell us it was probably nothing though, in-case it was. Nothing had been proved - it was just all a check to make sure. This cheered Sarah up. We decided to get strong and get discharged and head over there together.

It was 2PM when he left. It was suggested that we'd get discharged at about 4PM. So we headed to the ward and no-one really bothered with us that much until about 5PM. The midwife on duty said she was working on discharging us but she needed to wait for the doctor to give us all Sarah's pills. Around half 6 Sarah got her pills. We phoned about Alex and were told he hadn't been seen yet. We decided that time was ticking on, we were both completely exhausted so we told them we'd be there first thing in the morning after a much needed sleep. This wasn't a decision we took lightly and our brains had to override our hearts. Then there was a shift change, and a while later the midwife from the previous night who kicked ass with the transfusion turned up. Once again she kicked ass, she told us all about the pills, took a bunch of needles we didn't need from us - and asked if I'd like to pick Sarah up at the emergency exit to save her being out in the cold too much. She lead me there and told me to come back here with the car.

I started walking to the car. I got excited. We were leaving, finally. Sarah was coming home. So I started to run. I was about 10 feet away from the car when I realized that I hadn't paid my parking ticket and wouldn't be able to get out of the car park. I changed my direction immediately towards the payment machine - even though it would look ridiculous to anyone that was watching. I paid the ticked, ran back to the car and got to the exit just as the nurse was wheeling Sarah out. She carefully climbed into the car and we were off.

We were tired when we got home. Past tired. It was 11PM and we wanted to get up early to head over to Alex. We were both still feeling really shit that we hadn't headed straight there. We just wanted to roll into bed and sleep it all off. Then Sarah's phone started ringing. She couldn't move so I ran to get it. It was a blocked number. She answered it and I pushed my ear to the back of it so we could both hear it. It was them. This was the news we were waiting for. I didn't breathe. It was an upbeat woman on the other end. She explained that they'd given him some dye or something and xray'd him again and there was definitely no obstruction. He was fine and we could take him home tomorrow. I had tried to stay strong and not cry in-front of Sarah when there was bad news. I knew it was upset her and make things worse, so I was being strong for her. But now he was safe. So I cried, and we hugged. All the tiredness disappeared. I felt like I could run a marathon.